Automate the tedious job of renaming variation groups. Fix your listings in minutes. This tool will download your simple-variation or multi-variation listings in a spreadsheet format that is ready to upload to eBay with your variation revisions. The tool can additionally capture the variation photos and provide a download and archiving option.

This tool will scan items found publicly on eBay without accessing your account, and can not search completely out-of-stock items, since those items are not publicly viewable; although listings that are not completely out of stock will still return the data for any variations with zero inventory. A report will be generated in eBay's File Exchange format that will include variation details.

The tool will retrieve and scan up to 10,000 items (variations contribute to that total) and, out of those 10K items, will return only those items that have variations. Use the search criteria to reduce the search range if you have more than 10,000 items, thus creating subgroupings based on category, price, or date order.

You may wish to terminate markdown sales prior to revising affected listings so that the tool can capture your original pricing instead of your markdown pricing.

Sellers may subscribe to eBay's File Exchange on these sites. The Euro sites have certain requirements, which might include: business seller account, 90 days on the site, over 50 sales per month. US | CA | AU   [  UK | DE | FR | IT | AT | ES  ]

Download your Active Listing report through File Exchange (as illustrated below) and save the CSV file to your computer.

Open that CSV file using Notepad or a text editor, choose *FILE EXCH CSV from the country list on this tool, and paste that code into the box that appears. Click the "Use CSV List" button to start the scan.

Please note that the File Exchange list is sorted within your browser. Too large a file along with too many open pages and applications may cause the browser to appear to freeze.

Report - A report can be generated with the originally downloaded variation data for archiving and self-editing, or a report can find and replace the name of an attribute group as part of a "renaming" revision file. Report options include:

eBay's bulk revision process does not currently allow a mix of self-hosted and eBay-hosted photos, so we need to divide the job based on the image hosting type to avoid conflicts. Currently, eBay's API is returning original self-hosted URLs, even when the images have successfully transloaded to eBay-hosting (EPS) and display EPS photos in the listing. We are trying to find a way to deal with this. Until then, if your scan shows a mix of photos, it is best to divide the issues with this filter and decide how to separately address each group.

The tool additionally creates a separate spreadsheet with the URLs of eBay photos used in the master record and original variations. This list can be used to created a downloadable zip file of photos for the selected listings.

IMPORTANT - Before saving CSV data within your spreadsheet tool, or after making any changes and resaving, be sure that the number columns display as numbers and not as exponential notation. [Screenshot]

If you see something like 1.63E+11 in a spreadsheet column, right-click the column header, choose "Format cells", and change the format to "Number" with zero decimal places. Pay particular attention to columns that contain the Item ID and long numbers like UPC/EAN. You will have to make these changes every time you open the CSV. To preserve your number changes, instead of fixing every time, save the file as XLS. You can export a CSV from that file later.

If you don't convert the exponential numbers to whole numbers prior to saving, your long numbers will be converted to useless numbers with a lot if trailing zeros, like this: 162260000000. Or they may appear in your file as 1.63E+11 and your file will be rejected by eBay.

Zipping Variation Photos - Some users may wish to archive their current master and variation photos prior to updating variations through eBay's bulk uploader. After a report has been run, the lower zip window will include the data necessary for zipping the image files. Zipping requires several steps. First, you will prepare a copy of the report on our server by clicking the button to "Prepare Zip File". When the file is ready, a new button will appear so that you may "Send to Zip tool". The Zip tool will be launched in a new window, your prepared file will be loaded, and you can process your image file on that tool. Those zip files can be archived on your computer.

Uploading to eBay - The reports are generated in eBay's File Exchange format for uploading directly through eBay's Seller Hub as a revision template [Screenshot]. 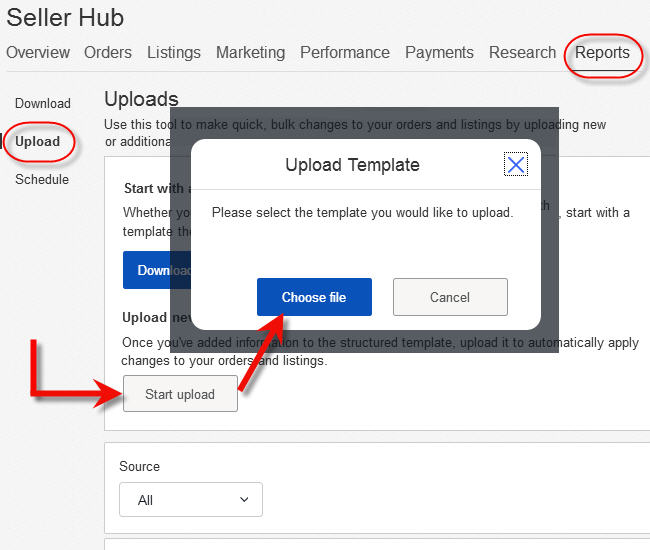 eBay has size limits to be aware of:

Because the variation spreadsheet produced by this tool doesn't contain many columns, the file size will not likely be an issue; however, the daily limit may be easily reached, particularly if there are multiple attempts to upload files.